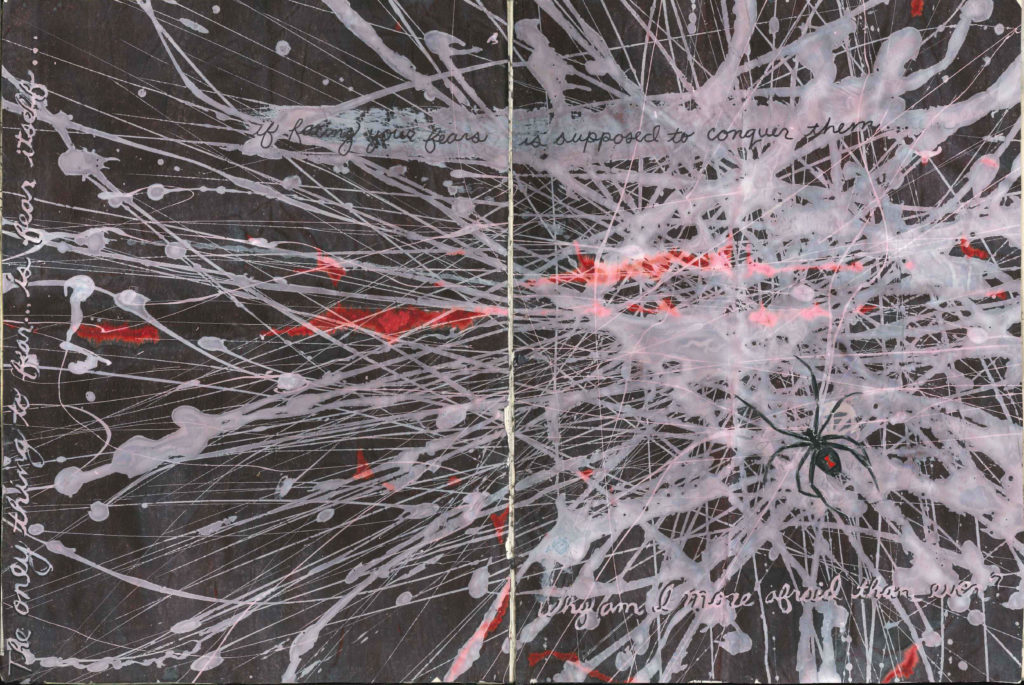 I have heard the saying, “the only thing to fear is fear itself,” (by Franklin D. Roosevelt) many times in my life. It’s a positive saying, a tool to motivate, a way to conquer your worries and move ahead. It makes sense. After all there are many things in life that cause unnecessary concern. Perhaps the only reason you hold back is to avoid the uncomfortable feeling of fear. It’s often the feeling, the knot in your stomach, heat rising to your face, that causes more distress than the actual thing or action. Once you conquer the sense of fear you can conquer the fear.

But, what happens when you are faced with the fear, you experience it, you survive it, you move on, and the fear still lingers? If facing your fears is supposed to conquer them, why am I more afraid than ever?

It was just another morning. I was at Nick’s apartment in Athens, GA preparing for my first class of the day at the wonderful, beautiful University of Georgia. I had just gotten out of the shower, I grabbed my jeans that were draped over the weight bench in his room, got dressed, and quickly took his dog (now our dog) Kody for a walk before heading to class. I had only made it a few apartments down before I felt a burning sensation on my leg. I lifted my pant leg to investigate when suddenly a spider fell to the ground right in front of me. I didn’t think much of it, my leg was a little red, but no big deal. The spider was very creepy looking, but I continued on the walk.

As I rounded the turn at the end of the street my leg suddenly felt like it was on fire. I checked one more time and a welt had appeared next to my knee. It was a sensation I had never felt before and my mind started turning trying to figure out what had happened. I suddenly connected the dots back to the spider. Could that have fallen out of my jeans? What type of spider was it? I decided to backtrack to take a closer look. The spider was still there, laying half dead on the sidewalk. I bent down to take a closer look and my heart dropped. A bright red hourglass decorated the belly of this very black spider. It was a black widow, it was in my jeans, it had bitten me.

As a child I have a very distinct memory of my dad bringing in a mason jar from outside. He gather my sister, brother, and I around the kitchen table and showed us what was inside. It was a very frantic spider he had captured from the wood pile next to our house. He explained it was a black widow. He flipped it over with a pencil to show the distinct hourglass marking that immediately identified it. He warned us to never play in the wood pile, it was full of them, and they are poisonous. He then took the pencil and killed the spider. Life lessons before dinner.

From there on out my sister and I would always joke about black widows to try and scare each other. The thoughts of them in my bed, crawling over my face, poisoning me with there venom would keep me up at night. A very real fear began to develop. As I grew older I never encountered another black widow. My sister and I stopped teasing each other with the possibility of middle of the night spider attacks, and my fear moved to the back of my mind, where it stayed and ruminated until this morning my junior year of college.

Despite not thinking about these creepy crawlies for years, the first thought that popped into my head was my worse fear was becoming a reality. I honestly had no idea if I was going to live, die, get sick, or be fine. I was a healthy adult, the spider had obviously seen better days, it bit me on a lower part of my body, it wasn’t near my heart, my leg only burned a little, I was going to be fine, I was going to be late to class, I needed to go ahead and seek medical help just in case, I better get in the car and go to the health center, what if I passed out on the way and get in a wreck?, I need to go, screw this spider!! After the long train of panicked thoughts my next action was to stomp on the spider many more times than was necessary to ensure its death before I loaded myself into the car to get to the university health center.

I could barely follow my own frantic thoughts as I walked into the building, when my spinning mind was interrupted by my roommate. It was the most random coincidence that she was in the parking lot at the exact same time as me. As soon as I saw her and registered her “what are you doing here?” question, I burst into tears. I realized right then that I was more afraid than I realized, my eight year old phobia had never diminished, it had just relocated to a quieter spot in my brain.

Elly walked my mess of a self into the health center, sat with me through the visit, and helped me home. I still don’t know why she was there that day, but I’m glad she was.

To make an already long story less long, I was told I would be just fine and to go home and take Advil for the pain. After hours of full body muscle cramping I called back to the health center to see what other options I had, they told me to come back in, and immediately sent me to the emergency room after seeing me. After arriving at the hospital, where a shocked staff wondered why I didn’t come in hours earlier, I was hooked up to morphine to help with my high level of discomfort and I spent the night. Despite the bite mark continuously beading with sweat for weeks after, I was just fine.

I survived. A black widow bit me, I saw the perpetrator up close, I confronted the spider (unfortunate for the spider), I survived. I was fine. No big deal. Yet, to this day I am even more afraid of black widows than ever before. I lived for years without seeing one between my dad’s introduction and my one on one meeting, but now I find them everywhere. I find them in every nook and cranny outside. I have seen them in my garage, in the doorway to my house, scrambling under my dishwasher. I’m fairly certain they are stalking me.

So I ask you, Mr. Roosevelt, if the only thing to fear is fear itself, why am I more afraid than ever?

I knew from the beginning that I wanted this to be a dark visual journal page. I had worked with bleeding tissue paper many times in the past and I knew the black that came in this pack would turn a red color when wet. It was the perfect combination of colors, the black, black with the blood red. I took a sheet of black and splatter water to encourage some of the red to come out. Once it dried I decided I wanted to splatter gesso to create a creepy looking web. I dipped a brush into watered down gesso and began splattering the paint across the tissue paper.

As I worked I realized the white gesso was being dyed a pinkish hue from the pigment in the bleeding tissue paper. Although I had planned on a white web, I liked the look. I allowed it to dry and began working on my spider.

I sketched it out with pencil and painted it in using black, white, and red acrylic paint. I wanted it to be realistic and creepy. I added some shadows and highlights to help it look three dimensional and left it to dry.

While the spider was drying I glued the now dry sheet of water and gesso splattered bleeding tissue paper into my visual journal. I carefully cut out the spider and glued it on top of the gesso web using rubber cement.

Next I used a thin brush and more watered down gesso to write the words on the bleeding tissue paper. I wanted to make sure the words were legible while still blending into the background. I wanted to make sure the spider was the main focal point. Because of that, the gesso was the best material to use. I chose to write some words with sharpie, to help it stand out against the layers of gesso, and to outline the gesso words with sharpie to help them pop.

Create a visual journal page about your biggest fear. Perhaps journaling about it will help you conquer it. Although despite facing my fear, journaling, and blogging about it, I am still pretty fearful of black widows.