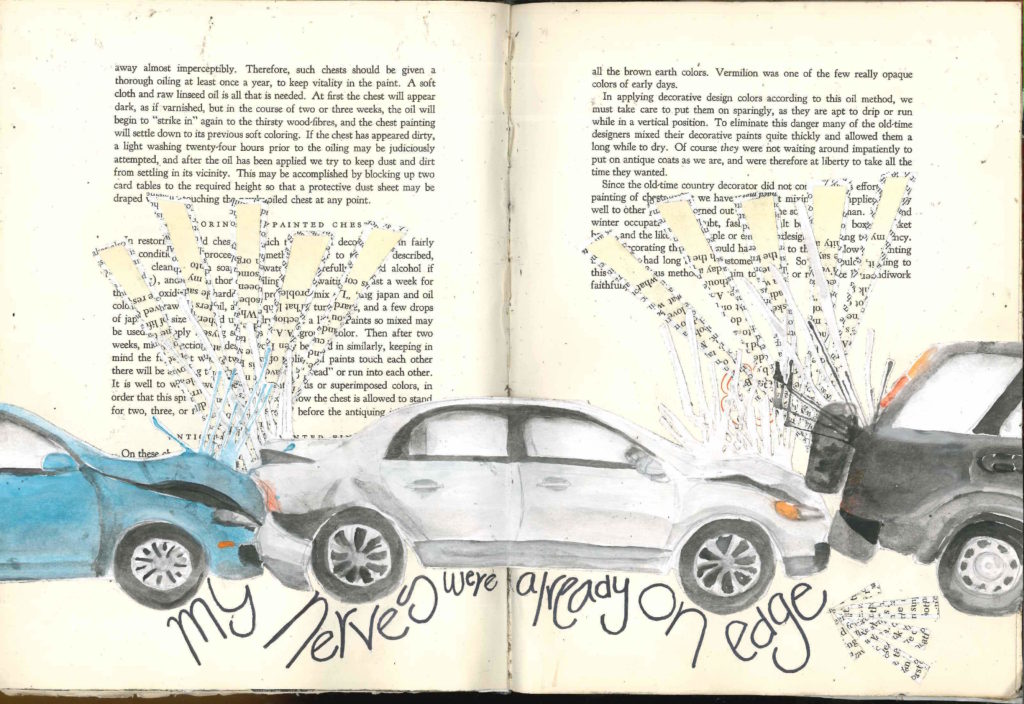 I was already on edge.

I had woken up early, showered, carefully selected my most professional outfit. I was driving on 285 en route to an interview.

It wasn’t just any interview. It was an interview at a well regarded private school that happened to be across the street from where my husband worked, we could carpool. I would have an actual budget to teach art. I would have small class sizes. I would work in a building dedicated to the fine arts. I could move on from my current job where I felt worn out, unappreciated, overworked, and like I was only a warm body available to proctor standardized test after standardized test.

A lot was weighing on this moment. I had to crush it. I couldn’t stay in my current job another year. Something needed to change.

All of these thoughts circled my head when suddenly taillights flashed ahead; the sound of crunching, and squealing tires followed. I glanced quickly to my right and miraculously in that split second the lane was open, I jumped over just in time. I had just missed being another car in a string of crushed metal.

A few seconds earlier or later and I could’ve been stuck on 285 while my interviewees awaited my arrival. I felt a wave of relief followed by the anxiety of almost being in an accident.

I was already on edge.

By the time I reached my interview my nerves had calmed, I had collected my thoughts, I was ready. I walked onto the school’s campus and was overwhelmed by how beautiful it was. I sat through five different interviews, and while intimidating, they were all so welcoming and nice. It felt like a place I could belong.

Seven years later that 285 corridor has become my commute. Hopefully I will continue to avoid accidents on my way to my beautiful campus and cushy private school job.

To create this visual journal page I wanted to recreate the scene of the accident. As I drove past and glanced to my left I saw at least three cars had rear ended each other, but quite a few were stopped. I decided to stick with that number, after all odds are more pleasing in art.

I sketched out the crunched up cars on a separate sheet of paper and filled them in with watercolor. While the watercolor was still wet I blew it where the cars made contact to create a splatter effect. Once the first layer of watercolor dried, I add more detail and some shadows and highlights. I cut it out once it was dry.

Next, I cut out triangle shapes from two different colors of book pages. I wanted to create a graphic, loud symbol that would somewhat blend into the background. I glued the smaller triangles on top of the a larger triangles, then carefully placed them in the book. Once I was satisfied with their placement, emphasizing the cars hitting each other, I glued them down.

The watercolor cars were added next, then a few more book page triangles to the bottom. Last but not least I added the text using a thin sharpie.

Create a visual journal page about a stressful moment in your life. Incorporate cut up book pages somewhere in your image.

Thanks for taking the time to check out my blog! Help me spread the word about visual journals with others. Thanks for stopping by. 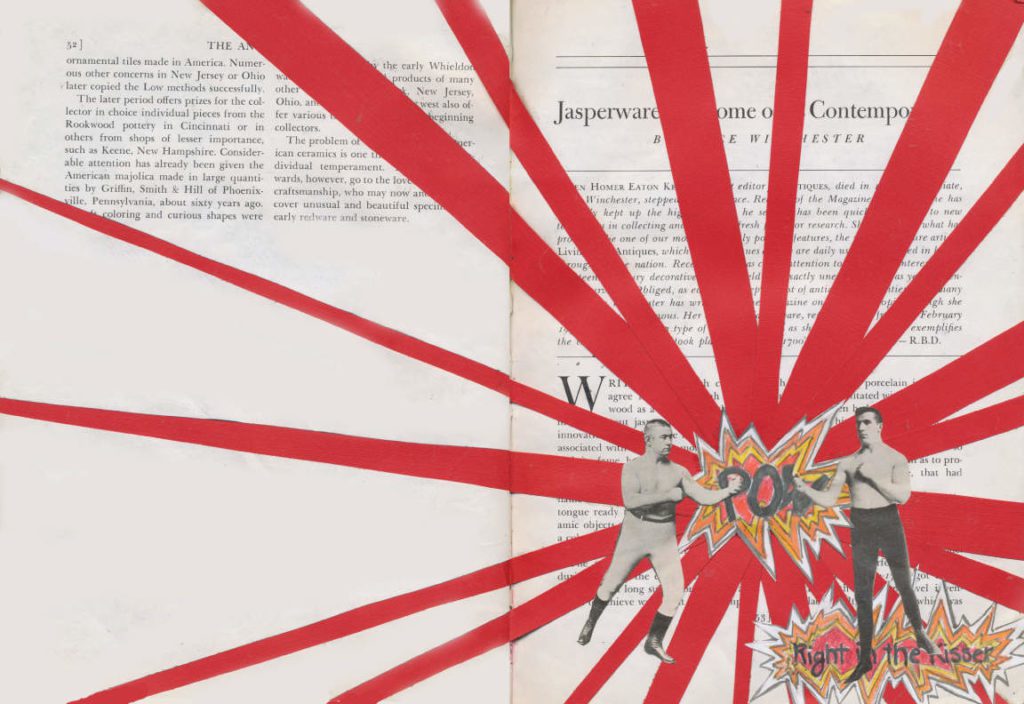 Everything can be turned into something fun. We constantly get off track when we are running errands, talking about this and that, and look at this thing we don’t need. Life is a game, we have a lot of fun together.

One of our long standing jokes is to fake punch each other and say “POW! Right in the kisser!”. It’s stupid, I don’t even know where it came from, it’s silly, but silly is fun. I can’t even remember who said it the first time, where we were, what we are doing, or what one of us was thinking to start the game. Despite that, it has lasted, so far it stands the test of time, and it continues on.

We have gotten to the point where sometimes we randomly exclaim our “POW! Right in the kisser” for no reason at all. People must think we are crazy.

One day as I was flipping through my old, donated LIFE magazine, which I had already used and abused, I stumbled upon this wonderful article about an upcoming boxing match. I hate to admit it, I didn’t read the article, but my eyes ate up the pictures. Man in tight white pants featured in the right corner, man in tight black pants in the left, ready to fight, who will win, the anticipation will last a lifetime, frozen in print. Both were shirtless, with their belly buttons consumed by high riding pants. They were serious, hands up, stern looks, they were ready to fight, and they looked ridiculous. A picture reel began rolling in my head, with tight, white pant man and tight, black pant man standing next to the sweaty, ripped, glaring, shorts, and shirtless boxers of today’s generation. They wouldn’t stand a chance.

Although I knew this page would be relatively simple to put together, I still wanted to make sure it had a strong visual impact. I started with the boxers, and carefully cut around their shoulders, tight pants, and tall boots. Next, I used colored pencils and drew out my words and comic book style background. I wanted to push the idea of a comic book, because in my mind, these men could only belong in a fictional story. Once my colored pencil drawing was complete, I carefully cut around the edges. I decided to use red construction paper to bring attention to the words and men, so I decided to leave a white border around my pop art design behind the words to help it stand out.

Once everything was set, I began working on the background. I cut wide stripes of red construction paper. I laid them out, and decided I wanted more, but I didn’t want to completely cover up the book page. My solution was to alternate between thin and wide stripes, which created a more interesting pattern. I carefully placed them, evenly spaced them, and began gluing them down. When I have images or paper going off the page, I always glue it down, with the excess hanging off of the edge. Once the page is 100% complete, I go back, and cut around the edges. This way I know it will be cut perfectly to fit the page.

Once all of the strips were laid down, I placed the “POW” in the center of the converging strips. I played with the placement of the “right in the kisser” until I settled on placing it in the right hand corner. Last but not least I glued the guys down, and my silly, Nick and Whit, game playing page was complete.

Create a page about a silly saying or game. It can be from any point in your life, as a child, teenager, college student, or adult! Reminisce and have fun!