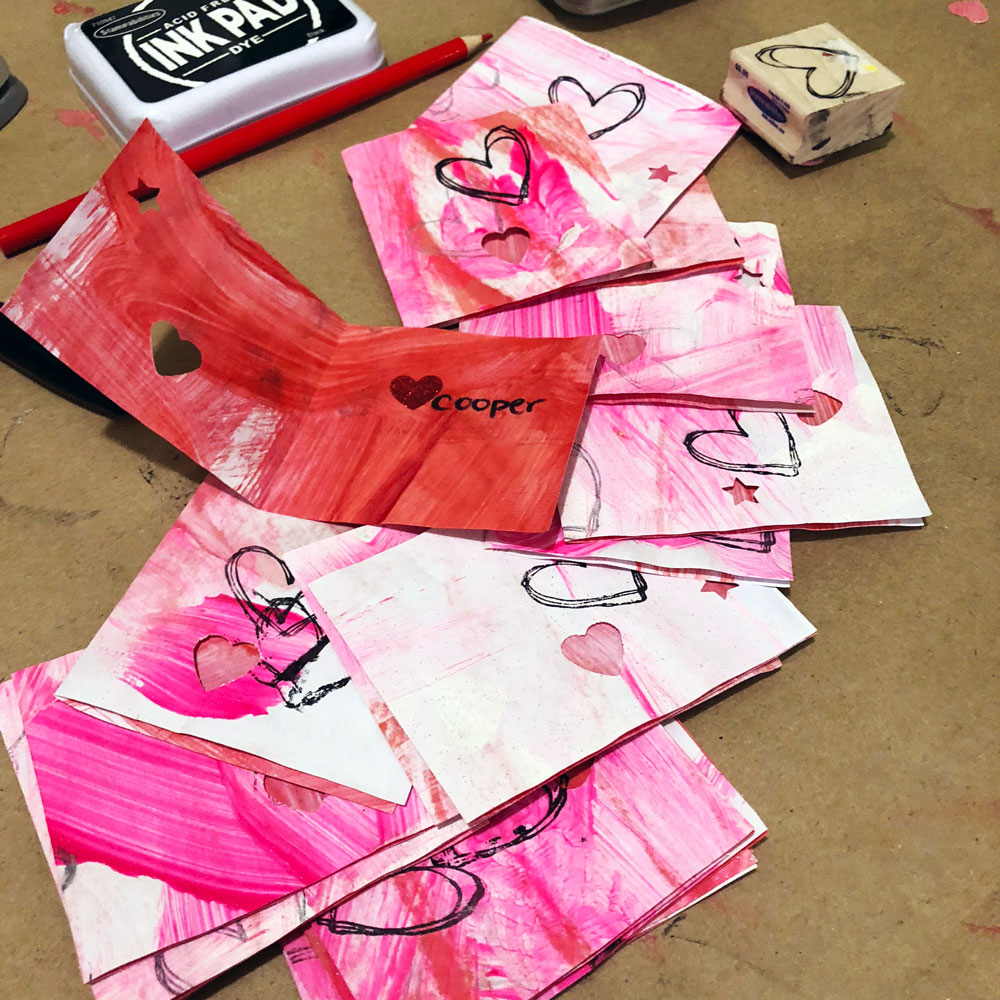 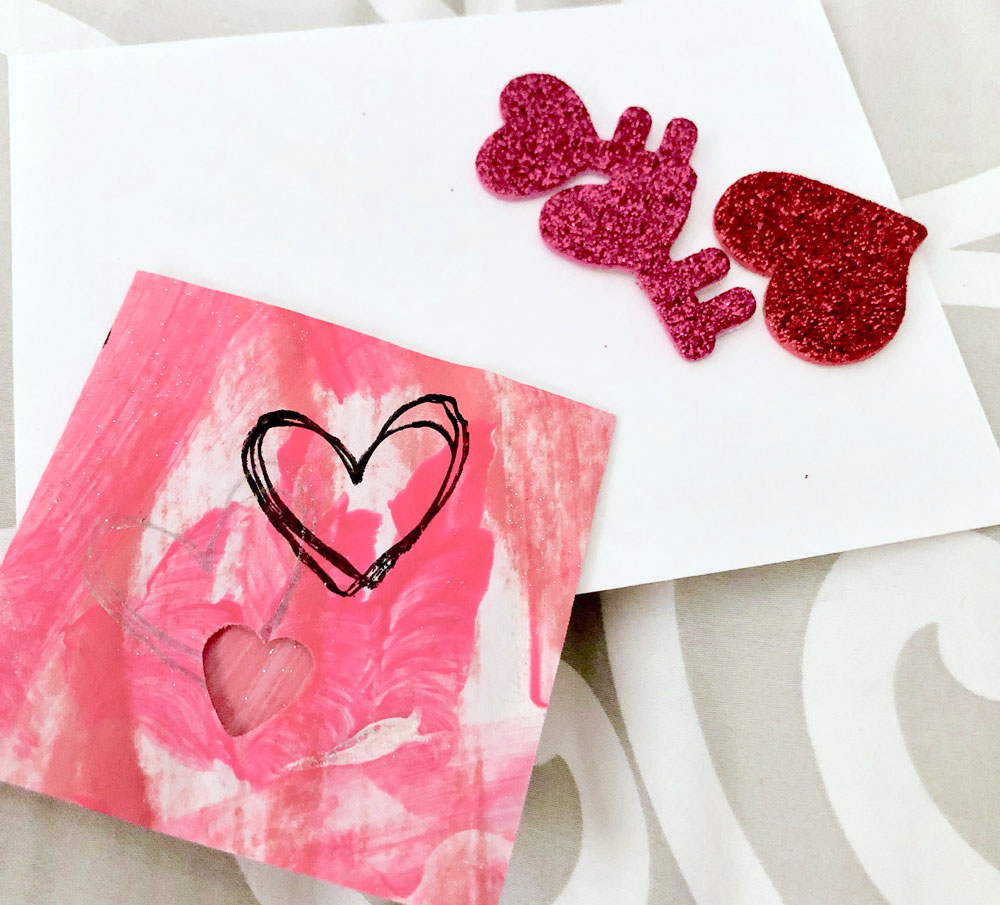 This year is the first year Cooper gets to celebrate Valentine’s day at school. Last year, as a one year old, he was a little too young to participate in the festivities. But this year, he gets to exchange valentines in the big kid room. We were asked to bring in 19 valentines to exchange with all the students at his daycare. I decided while he is still young enough to not have an opinion about what valentines to bring, we would make our own. Plus the art teacher/mom in me thought it would be fun to have a craft project over a very rainy weekend.

We started by using the easel he got for Christmas. I limited his color choices to pink, white, and silver, gave him two brushes, and let him go to town. I did encourage him to cover the entire page, but other than that, this was 95% Cooper painted. I decided to use the paper that came with his easel since it was large and already attached to the easel, but if I could go back I would’ve used a thicker paper instead. 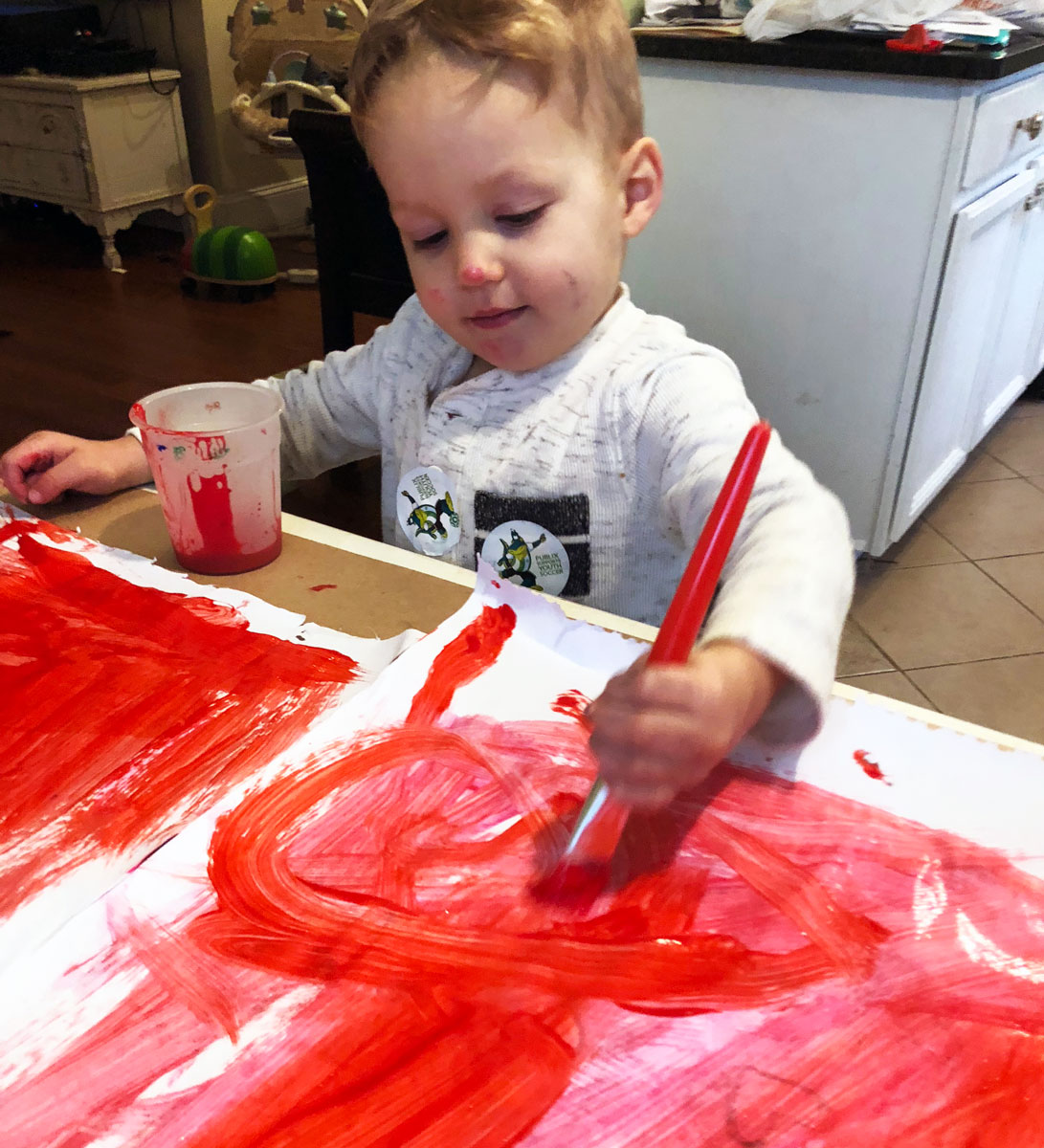 We painted two large sheets of paper using pink, white, and silver, then let them dry overnight. The next day we flipped them over and painted the back of the sheets with red and glitter red paint. I was much smarter first time around, having Cooper paint without a shirt on. I forgot to take his very white shirt off before painting with very red paint. Luckily, we were using washable paint, so the paint that inevitably ended up all over his shirt came out after just one wash. 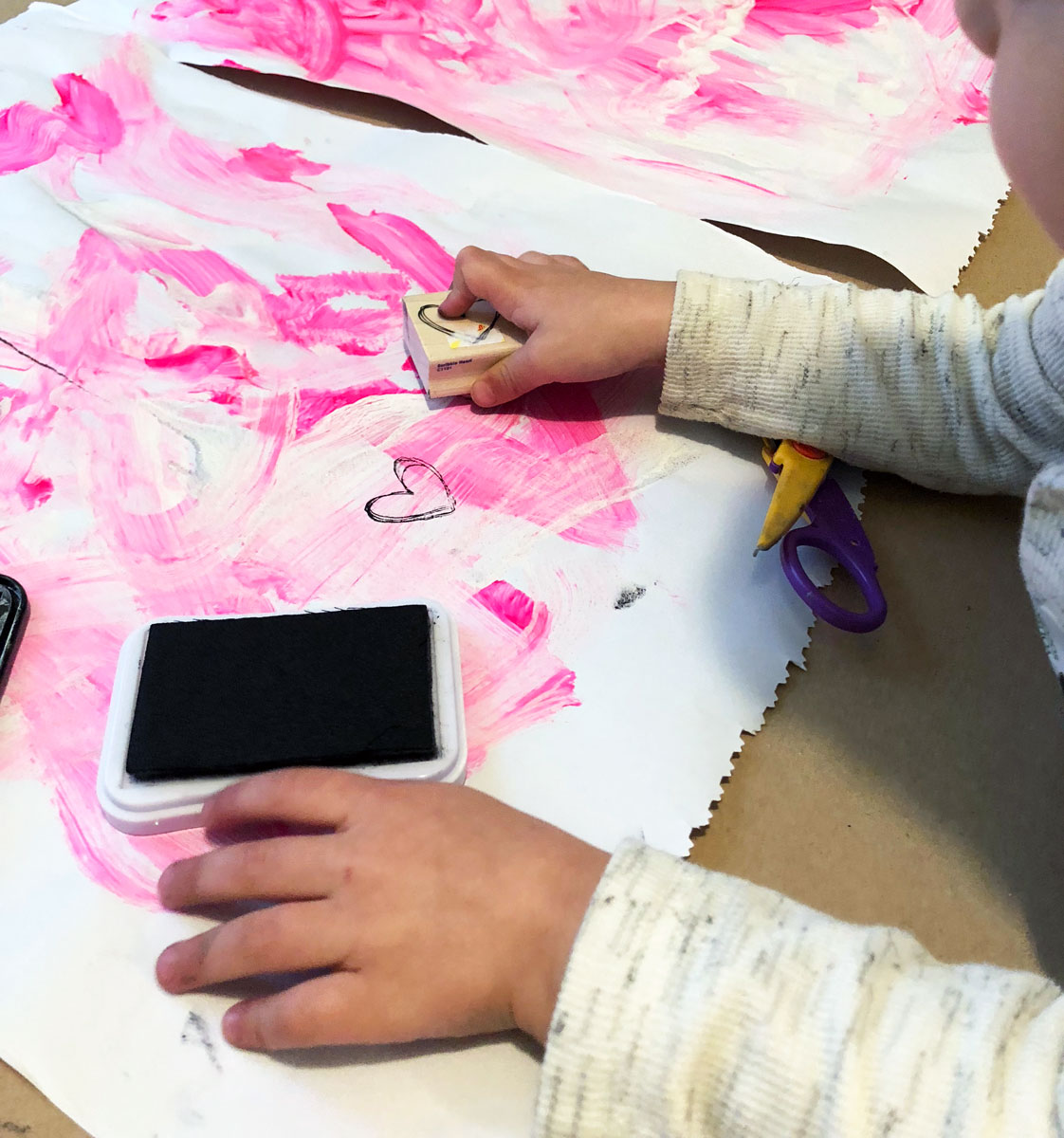 After we finished painting and the paint had dried, we started adding some other decorations. One of Cooper’s favorite parts was stamping with the heart stamp. 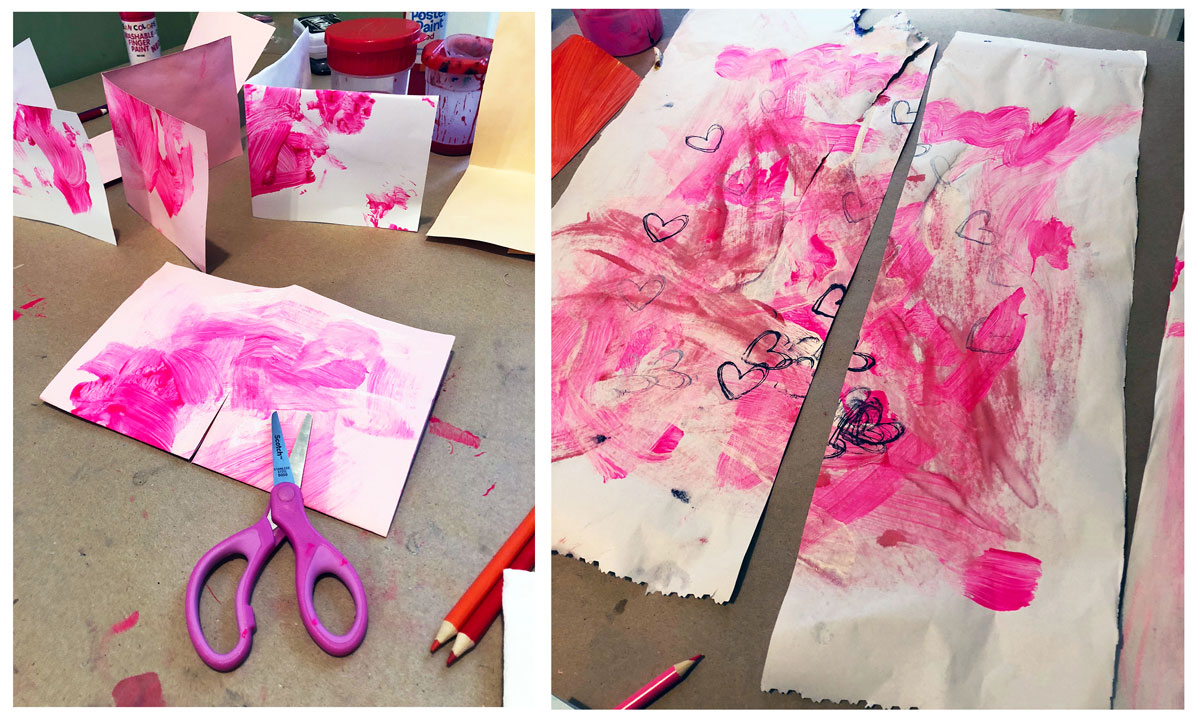 Next, I began cutting up the sheets of paper into smaller valentine size pieces. 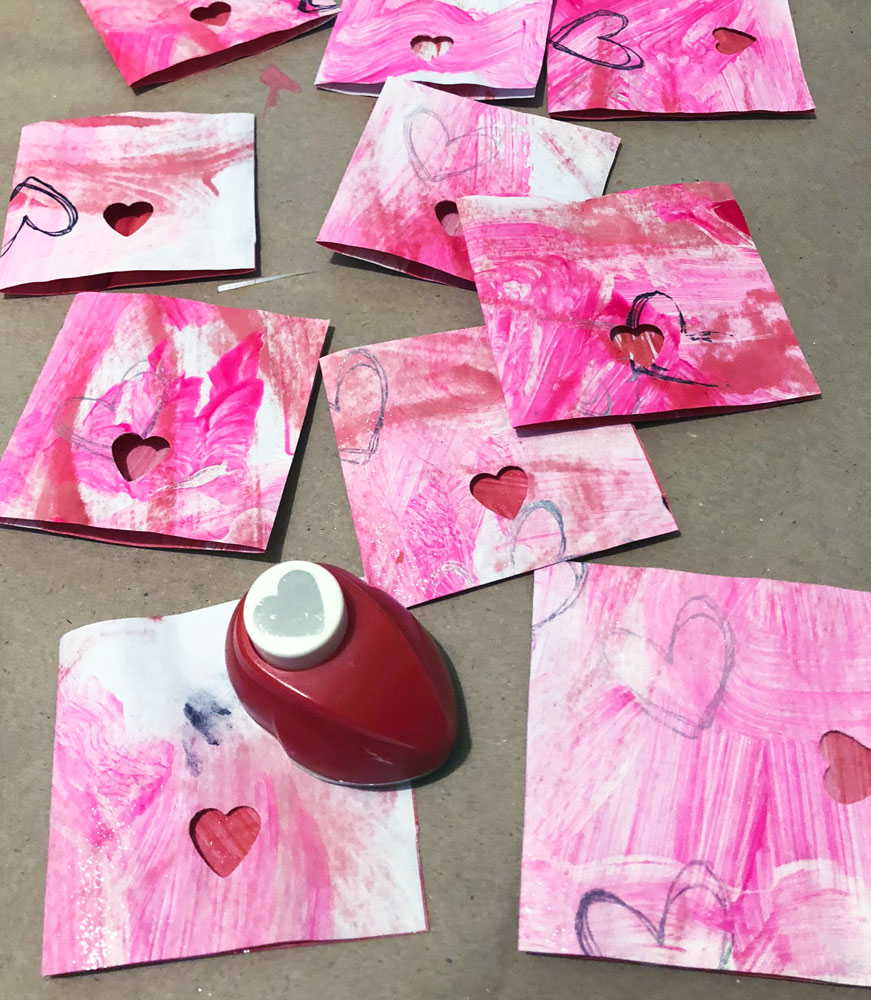 After cutting and folding them, we punched out heart and star shapes. I kept the pink and white on the outside and red on the inside so the heart cut outs would pop. The heart puncher was very hard to push down, so I handled those, while cooper added the stars.

After we punched, added a few more stamps, and some colored pencil scribbles, I had Cooper put a sparkly heart sticker on the inside of each one.

This year I handled the name signing. We will work on his alphabet so maybe he can sign a few next year. 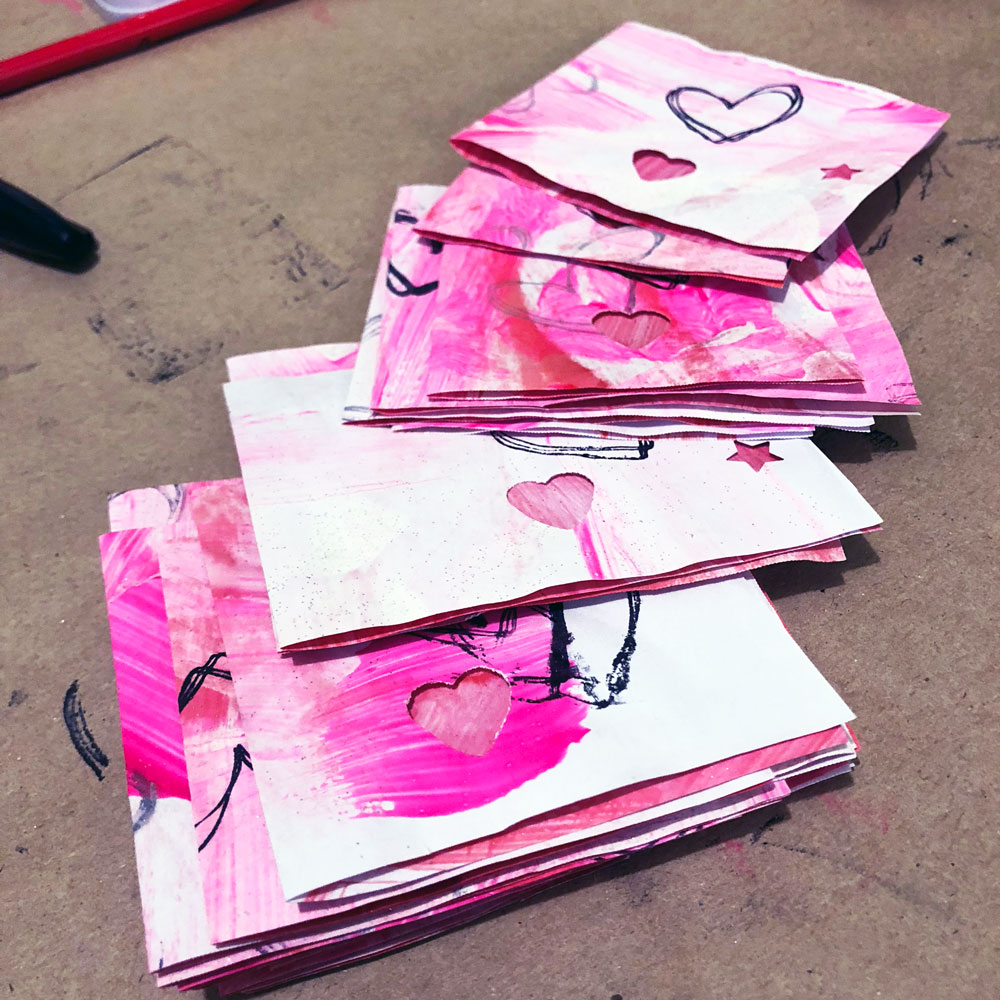 To finish them off we stuffed them in envelopes with a handful of sparkly, foam, Valentine themed stickers.

I love the homemade look of these valentines. I know this will probably be one of the only times I get the chance to do this. I’m sure Cooper will be seduced by the action heroes, minions, and other fun characters that cover the not as fun and unique valentines in the stores. Until then, I will soak up every minute of craft time with my little.

I hope you enjoyed this Valentine post on Valentine’s day. Help me spread the word about crafting with littles, art, visual journals, and all things crafty by sharing it with others. Thanks for stopping by!