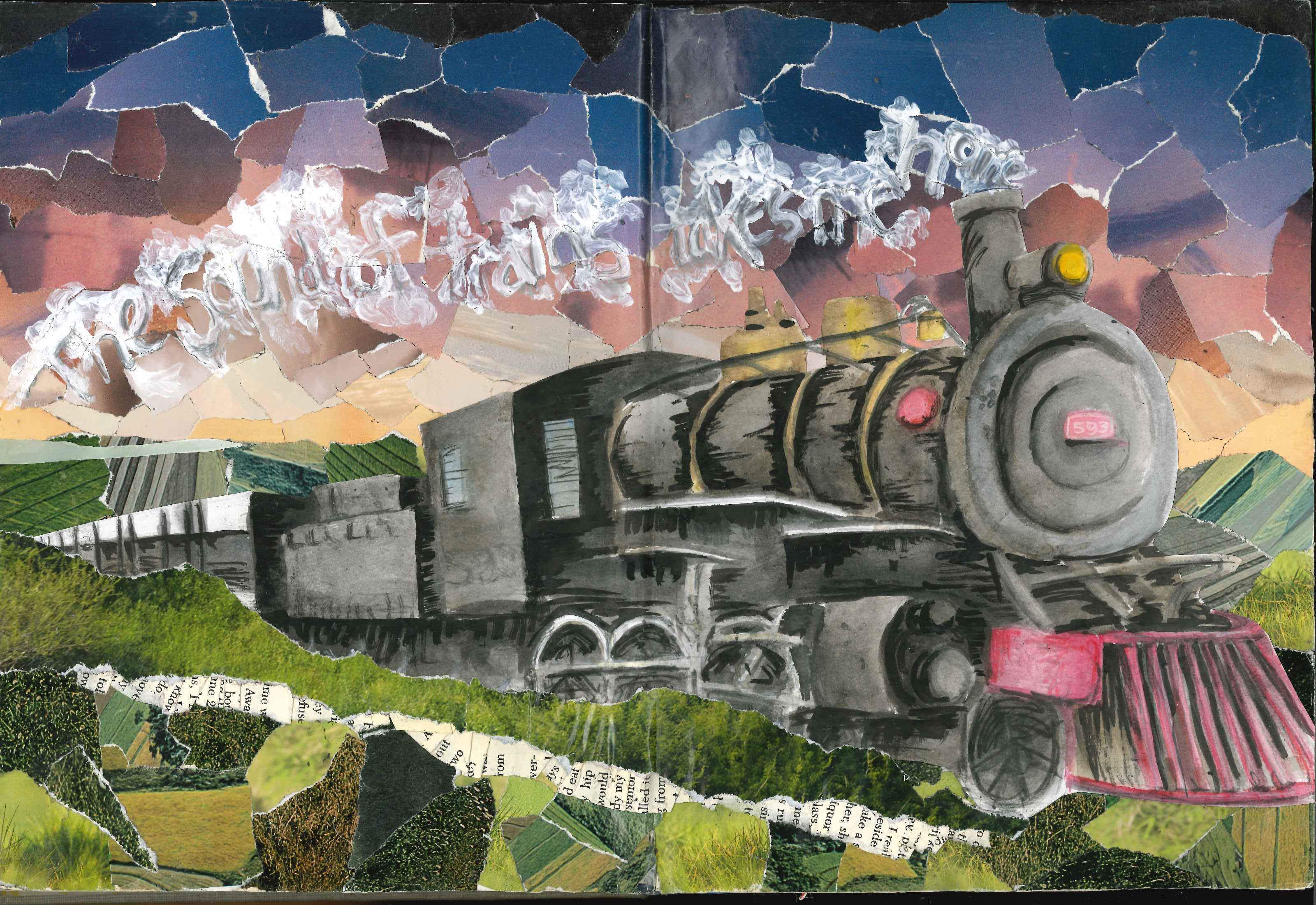 There is something about the sound of trains.

It first started on trips to visit my grandparents. They lived in a small town, it’s biggest claim to fame being their proximity to another small town, known only for their major, annual golf tournament. They were on the South Carolina side of the Georgia, South Carolina border. A place full of ya’lls and yes ma’ams.

I remember driving down the small town roads, turning onto their street, finding it odd they didn’t live in a traditional neighborhood. Commercial areas transitioned into residences without the signage and dead end streets of the neighborhoods I was so accustomed to. This was reminiscent of a different era, which was reflected in so many ways in their home. From the split level, ranch style house, that lived on a non-neighborhood street, to the objects it held within it’s walls.

This was the house my mother grew up in, and it felt like home.

I remember lying in bed, full of “grandmommy macaroni and cheese,” dreaming about the animal shaped pancakes that would surely be waiting for me the next morning, hearing a train whistle in the background.

I feel asleep to that sound many times as a child and the memory traveled with me into adulthood. The funny thing about memories associated with senses is you often don’t realize they are tied together until you experience it.

At twenty-three it had been years since I spent the night at my grandparents house and I had just bought my own house. My new husband and I moved into our sweet 1940’s Atlanta bungalow our first year of marriage. In the days and weeks that followed, we unpacked and settled in. I distinctly remember slowly drifting off to sleep one night when I suddenly heard the sound of a train.

I was immediately thrust back into my grandparent’s house, sleeping next to my sister, looking out the window of the only slightly second story. My new house didn’t quite feel like home yet, but in that moment it began to.

Eight years later I am still living in my adorable house, listening to train whistles, fully feeling like this is my home. My adult home, with the train whistles of my childhood, with my babies now falling asleep to the same sounds in a different town.

For this visual journal page, I knew I wanted to focus on a train. After searching for an image of a train, I came up empty handed. I couldn’t find the exact angle or size that I wanted and needed to fill the two pages of the book. After brainstorming. I finally decided to paint the train myself using watercolor.

I sketched out the body of the train, referencing images online to plan out the design and colors. Once I had a base sketch, I began filling it in with watercolor. I started light and slowly added in the shadows. If you go too dark too quickly with watercolor it is difficult to add highlights back in. It’s best to work light to dark and plan ahead. Once the paint dried, I cut it out.

Once the train was finished I decided to create a background using magazine images. I liked the contrast between the realistic imagery and painterly train as well as the difference in the shiny texture of the magazine and the matte finish of the paper. I knew I wanted to create a color fade in the background to create a feeling of dusk. As I flipped through magazines I kept my eyes peeled for any large sections of black, dark blue, purple, yellow, and green fields and grass. Anything I thought could work, I ripped out.

Once I had a sizable stack of magazine pages, I began ripping them up. I love the look of collaging with ripped pages. The soft, organic edges create a more interesting pattern than cut edges. I separated the ripped up pieces into piles according to color. Because I wanted it to look like night was pushing out day, I began layering the lightest colors first. As I moved from the middle of my visual journal page up, I overlapped the dark colors over the light colors until I had black at the top of the page. Check out a post that details the process of creating a magazine fade here and here as well as a Youtube video here.

Next, I worked from the middle of the visual journal down. I used fields as the background of the landscape and worked my way forward to grassy patterns. As I glued the foreground down, I kept checking the placement of the train until it was positioned the way I wanted it. I glued the train down, than continued overlapping the grass over the bottom of the train and continued to move towards the bottom of the page.

After the page was finally filled up, I added the steam coming from the train. I decided this was a perfect space to incorporate text in a way that blended with the image. I used gesso and a paintbrush to loosely add the steam, then painted the letters in a similar way so they would blend in with the steam. Once the gesso dried, I used pencil to emphasize the text a little more.

Create a visual journal page about a memory/sensory tie you have experienced.

Thanks for taking the time to read about my visual journal and check out my blog. You can find an image of my grandmother in a recent post here. She unknowingly became the subject matter for a printmaking project. Don’t forget to save this project for later by pinning it, or saving it on your social network site of choice. Thanks for stopping by! 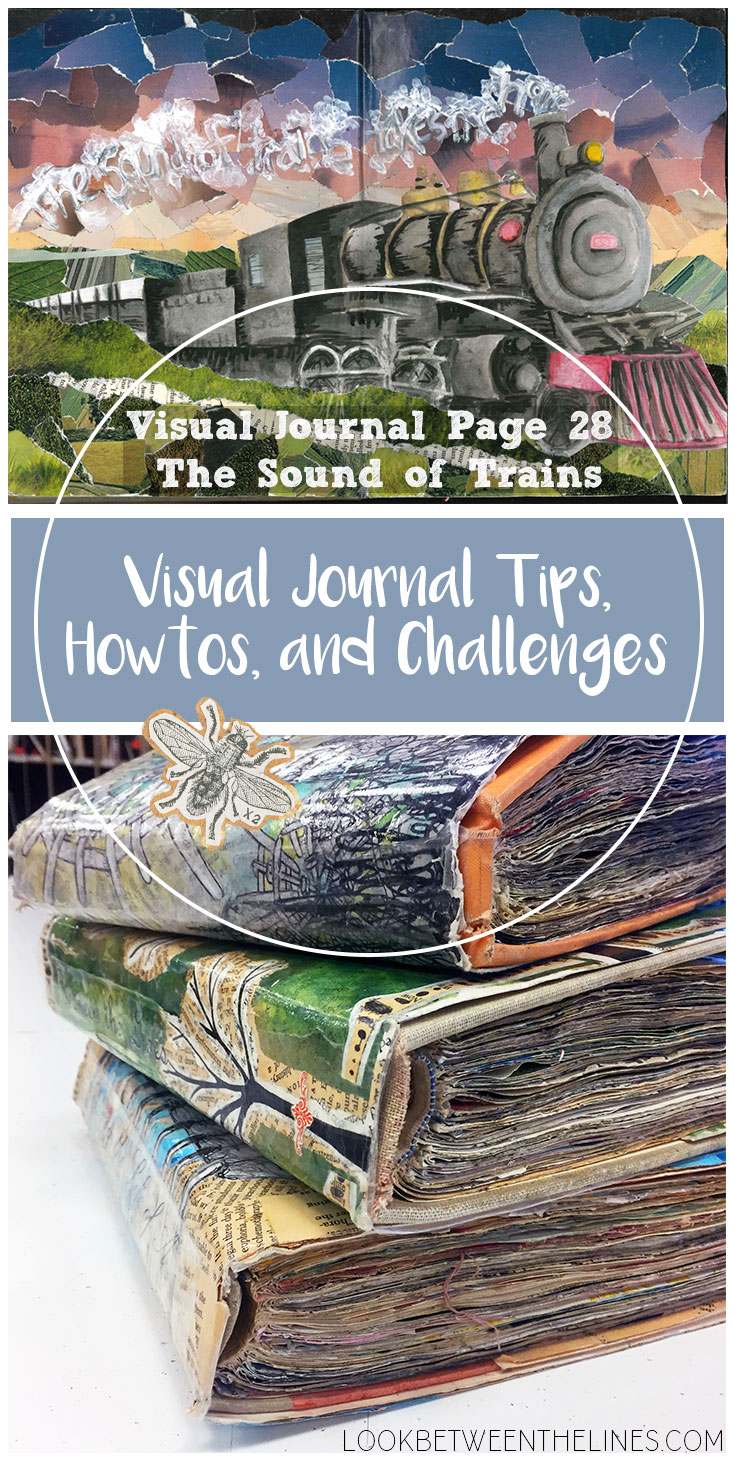