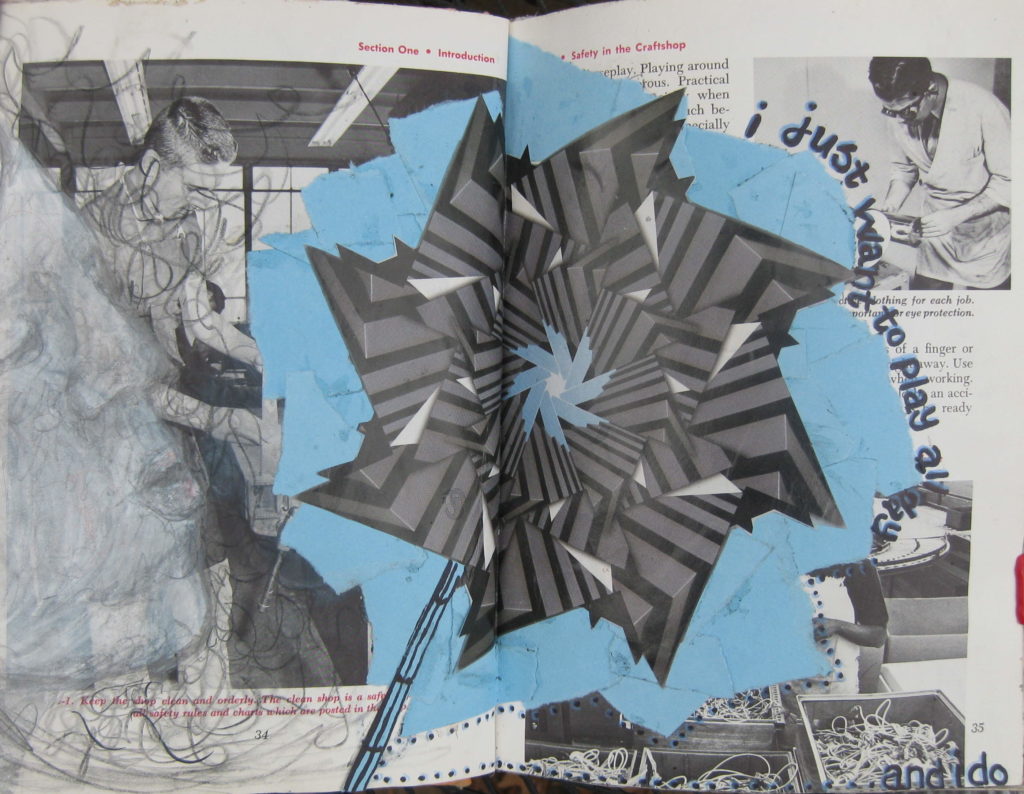 As I have said in earlier posts, I often relied on magazine images for inspiration when I first started journaling. There isn’t anything wrong with that, it is a good way to get started, but once I felt more comfortable with how to set up images I began drawing and painting more. This page was inspired by the geometric shape in the center, which I found in a magazine ad. I held onto it for a long time until an idea suddenly hit me. The shape was very reminiscent of a pinwheel, which I wanted to play off of because it is a nostalgic toy and has a vintage feel to it.

Once I decided to create a pinwheel, the rest of the page worked itself out. I decided to challenge myself and practice drawing profiles, which are difficult, and create a person blowing the pinwheel. It doesn’t look all that great, the nose is a little smushed, but I was proud that I went out of my comfort zone and tried something new.

The words came easily once I had the image laid out. I was in my first year teaching and although I had a number of rough patches and moments where I questioned my career path, overall I really enjoyed my job. How many people can say that they go to work and make art all day? How many people can say they had an opportunity to inspire someone, and be inspired again and again. How many people can say that they had a chance to impact the way someone thinks… at least I hope that’s the case… I love my job, and every year that passes is another year that instead of asking myself, “do I really want to spend another year doing this”, I’m thinking, “I could never give this up”. I go to work and get to play all day, and it doesn’t get any better than that.

I ripped up construction paper and glued it down behind that geometric shape. I wanted to pull out the blues in the design, so I matched the color as close as I could with the paper. To emphasize the idea of the pinwheel I created a handle using construction paper and sharpie. To create the face I sketched a basic outline in pencil, then filled in the shape with gesso. Once it dried I used pencil to add detail and shadows. Gesso is a great material to use to draw on top of, because when you blend it typically turns out very smooth. To add to the image I scribbled with pencil in the background. I used sharpie for the words, then added a shadow effect with blue colored pencil that also matched the blues in the construction paper and geometric shape.