This is my most recent mixed media painting. I was commissioned to create something with blues, greens, and yellows, but other than that it was up to me. At first I was stumped. Whenever I take a break from painting sometimes it takes a minute to get my creative juices flowing. However, even in my most stumped states I generally have a rough concept… but even that was lacking in this painting.

After putting it off for awhile I decided I needed to get started. I went to the store and picked up a variety of things I could incorporate into whatever I decided to create. I chose fabric that included the colors I wanted to use, went home, and got to it. I slowly made my way to this composition, the girl on the right, and the trees on the left. Slowly, but surely, everything began to work itself out.

I am very happy with the end result. I was nervous going into it because I didn’t have the idea completely worked out. However, I think that is part of the success. I was able to be loose, experiment, and in my opinion the result was very successful. Often times people go into a work of art with a specific concept in mind, and that is often their downfall. If the end result doesn’t match what is in their head they may consider it a failure. I hope my future paintings work themselves out as well as this one did, I enjoyed the creative process much without the preconceived concept. 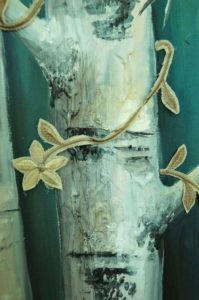 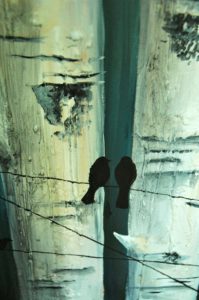 I started by loosely drawing everything out with pencil and followed by painting in the background. I  wanted it to be dark behind the trees, so I used Paynes Grey, Pthalo Blue. and Pthalo Green. I faded these colors into a more turquoise blue and Naples Yellow. After I had the background color I began building up texture on the trees using melted modeling impasto. I layered paint and wax, and used a heat gun to melt it in-between layers. I ended with a final layer of oil paint on top. To read more about using encaustic click here. 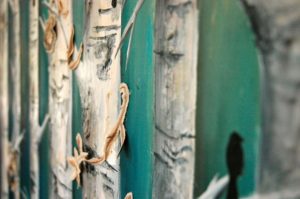 Once I had my trees worked out I began working on the girl. At this point I already had a base color for her skin, and I began adding details. Once I completed the girl, and allowed it to dry, I began constructing her dress. I cut out the flower pattern from one fabric, and layered it with a neutral color fabric. I used a hot glue gun to attach the fabric to the wood board. Once I had the girl complete I added the wire and the bird silhouettes. Last but not least I used a transparent encaustic wax, painted a layer on the top and bottom of the wood canvas, and used a heat gun to melt it. I turned the canvas upside down to make the bottom portion look like it was dripping up. 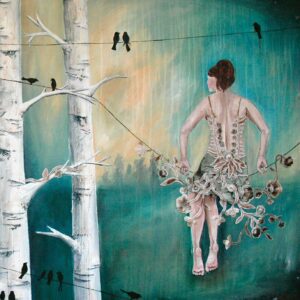 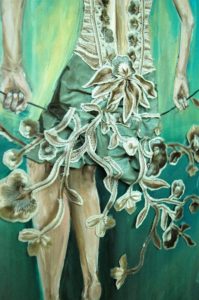