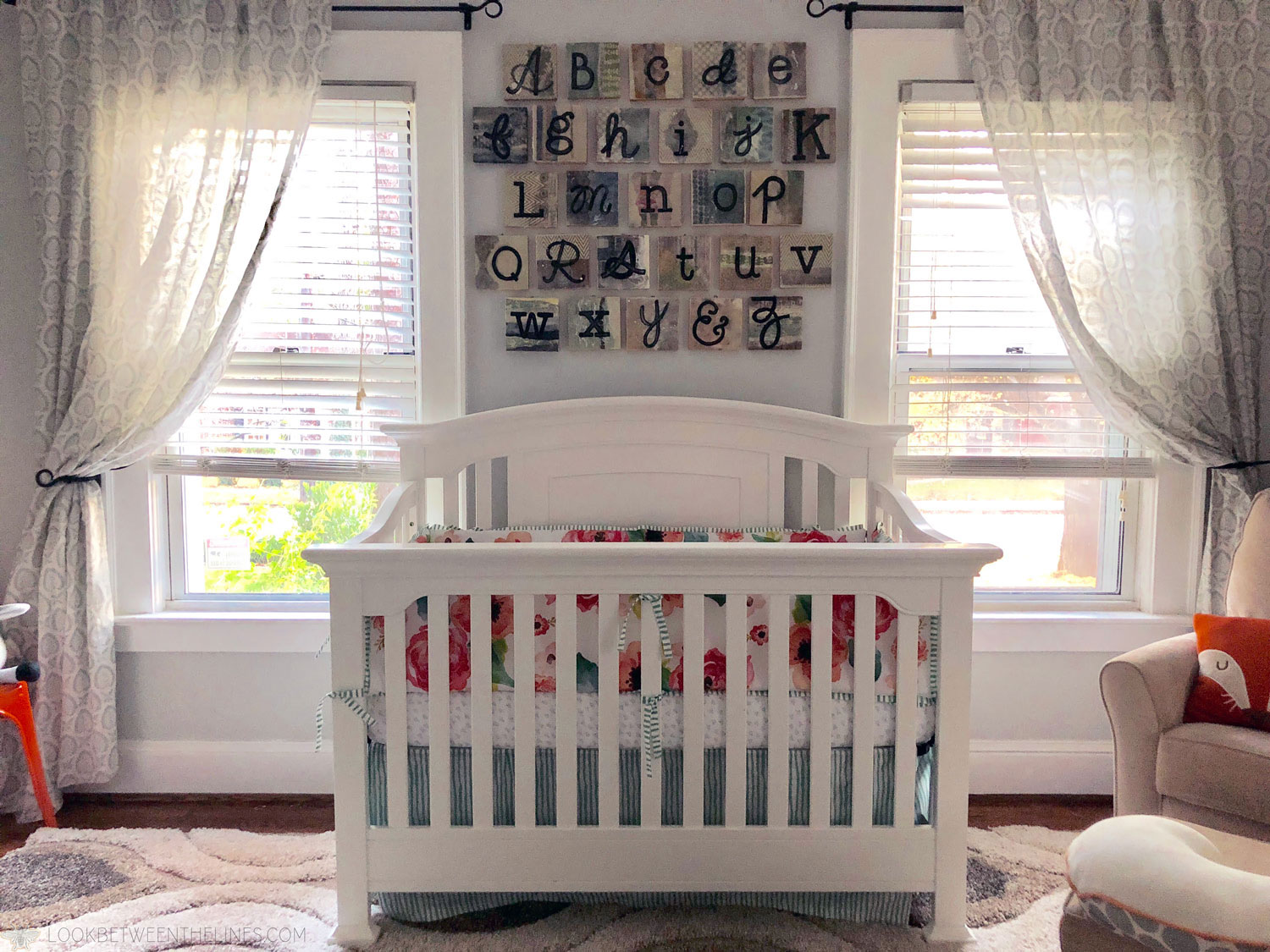 This past November Nick and I welcomed our second child, the sweetest little girl named Kennedy. We were equal parts excited and terrified for her arrival. Having gone through it once made me more fearful because I knew exactly what was coming. There were going to be a lot of sleepless nights, a seemingly endless feeding schedule, and barely any showers; plus I also had to care for our two year old (wild man Cooper).

Before Cooper’s arrival in November 2015, I planned, prepped, and set goals to have everything ready before I started back at work in August. With it just being Nick and me (plus a handful of chickens and dogs) my goals were easily accomplished. Cooper’s nursery was ready to go months in advance. In the weeks leading up to his birth I sat around, caught up on shows, and daydreamed about life with a little.

In the weeks leading up to Kennedy’s arrival there was no sitting around or daydreaming. In August 2017 I realized a baby would be in our house in three months and I had not started preparing anything, at this point with Cooper I was already done. As the weeks passed, I would contemplate layout, design, and what needed to be purchased in between chasing Cooper and cleaning up after a two year old tornado, but there never seemed to be enough time to actually act. As 11/21/17 showed up around the corner I finally jumped in. Step one was setting up Cooper’s big boy room so I could move the crib to Kennedy’s room (more on that to come in the near future). Step two was to order furniture, rugs, and side tables, plus enlist the help of my mom to create her bedding. I was running out of time.

Just two weeks before Kennedy’s arrival, I finally got everything in place. And although her room was a much quicker process than Cooper’s, her room has become my favorite room in the house. The combination of soft neutrals, pops of color, and amazing bright light create a tranquil space.

One of the first things I did when I finally got started was begin looking at fabric patterns on Spoonflower. Luckily, I have a very talented mom who was willing and able to help me with Kennedy’s bedding. I knew I wanted something big, floral, and feminine (but not too pink or over the top girly) and for some reason I was really set on orange and green. It didn’t take long for me to find a pattern that was not quite orange but not quite pink and was just what I was looking for. I paired it with a simple  green stripe for the skirt. The name of the green stripe pattern was “She is Fierce,” which is perfect for the strong, independent, feminist woman I plan to raise. Side note: The bumpers were removed before baby girl began sleeping in her crib. They will make their way back in once her ligaments start getting stuck between the bars at night.

The alphabet hanging above Kennedy’s crib also came from Cooper’s nursery. I have been working in mixed media, oil paint, and encaustic for the last 7 or so years and began making letters around that time. At first, the hanging alphabet was more of a necessity. I didn’t have the space to store all of them so I decided to display them. When we found out Cooper was coming along, it just made sense to keep them up in his room. You can read more about the encaustic process here. 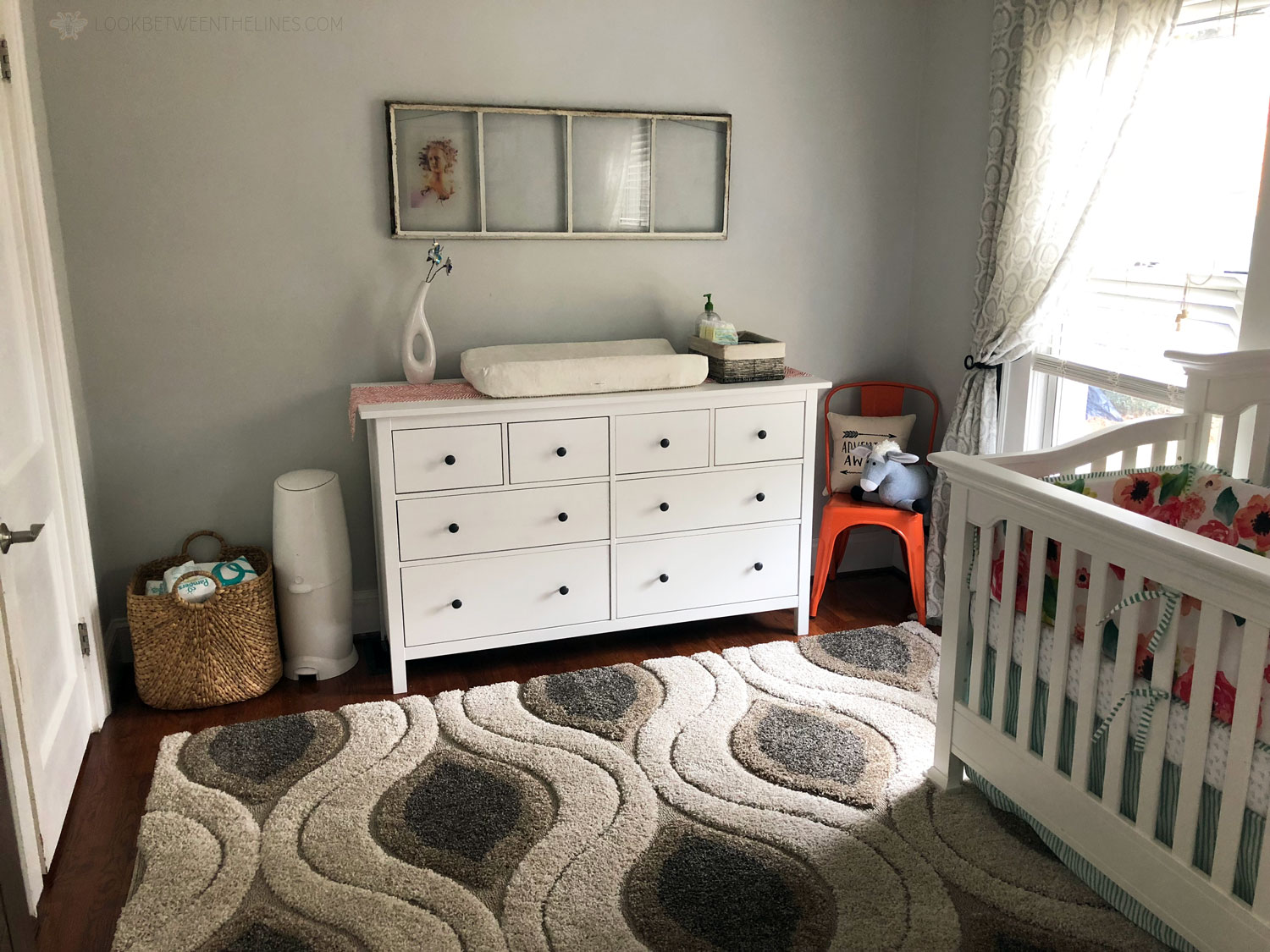 The next items I had to focus my attention on were the rug and dresser/changing table. Because both of these items had to be ordered and shipped, I needed enough time to get them in. The rug came from Overstock.com, where I buy all my rugs. It was incredibly affordable for the size, which means it can also be ruined without me stressing over cost to replace it. The dresser came from Ikea and seems to be the standard go to for any nursery. I can’t count the number of times I have seen this in my friends’ nurseries and displayed in nurseries online. It’s durable and the perfect height for a changing pad. The Diaper Genie, baskets, and changing pad were all recycled from Cooper’s nursery. 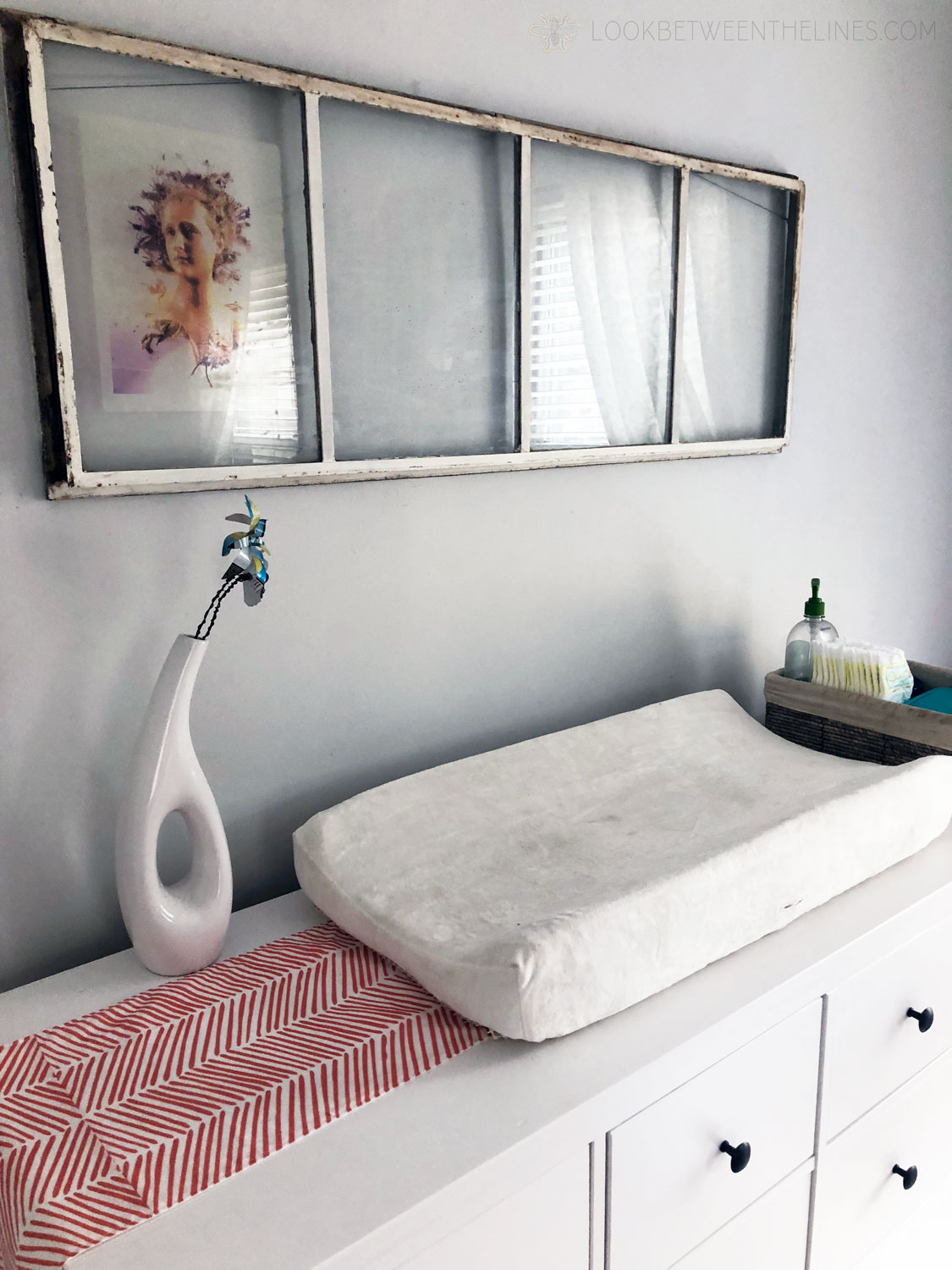 One of my favorite things in her room is the window hanging above her changing table. This was in the first apartment I moved into in Atlanta after college. It was stowed away in a high up nook in the living room. The previous tenant had left it behind and I fell in love with it. When it came time for me to move out of my adorable upstairs duplex, on top of a hill in Lake Claire and into my East Lake home with my soon to be husband, you better believe this came with me. It lived in our kitchen for 7 years until I decided it was perfect for Kennedy. I have no idea who the woman is in the image, but I love her confidence. 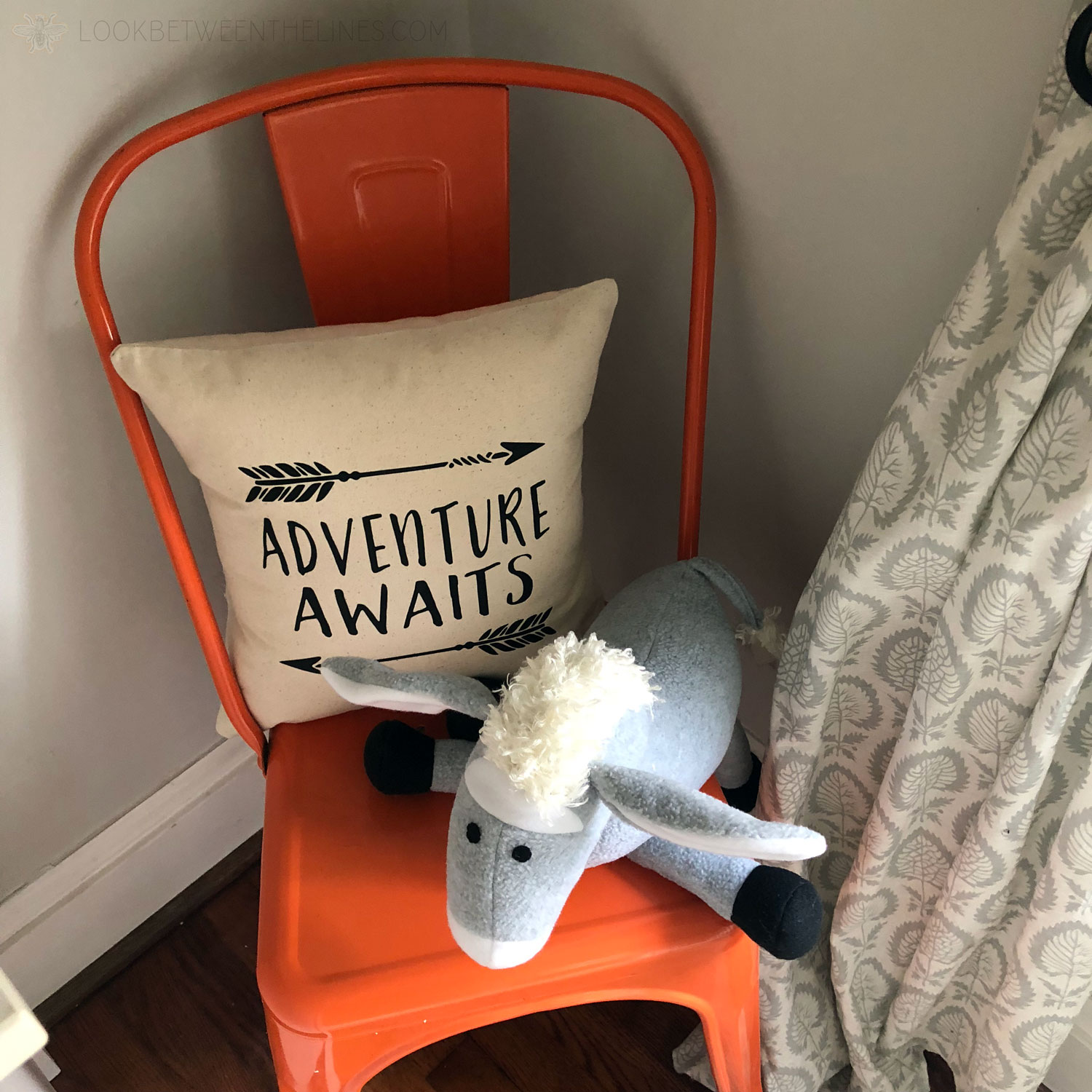 The orange vintage chair was found at my favorite antique spot in Atlanta, Kudzu Antiques. I purchased it not even considering using it in Kennedy’s room, but it was the exact color orange I had in mind for the accent color in her room, it was meant to be. The pillow was found on Etsy and the stuffed animal was bought at a craft fair. I fell in love with the donkey and it was the first toy I purchased for her. 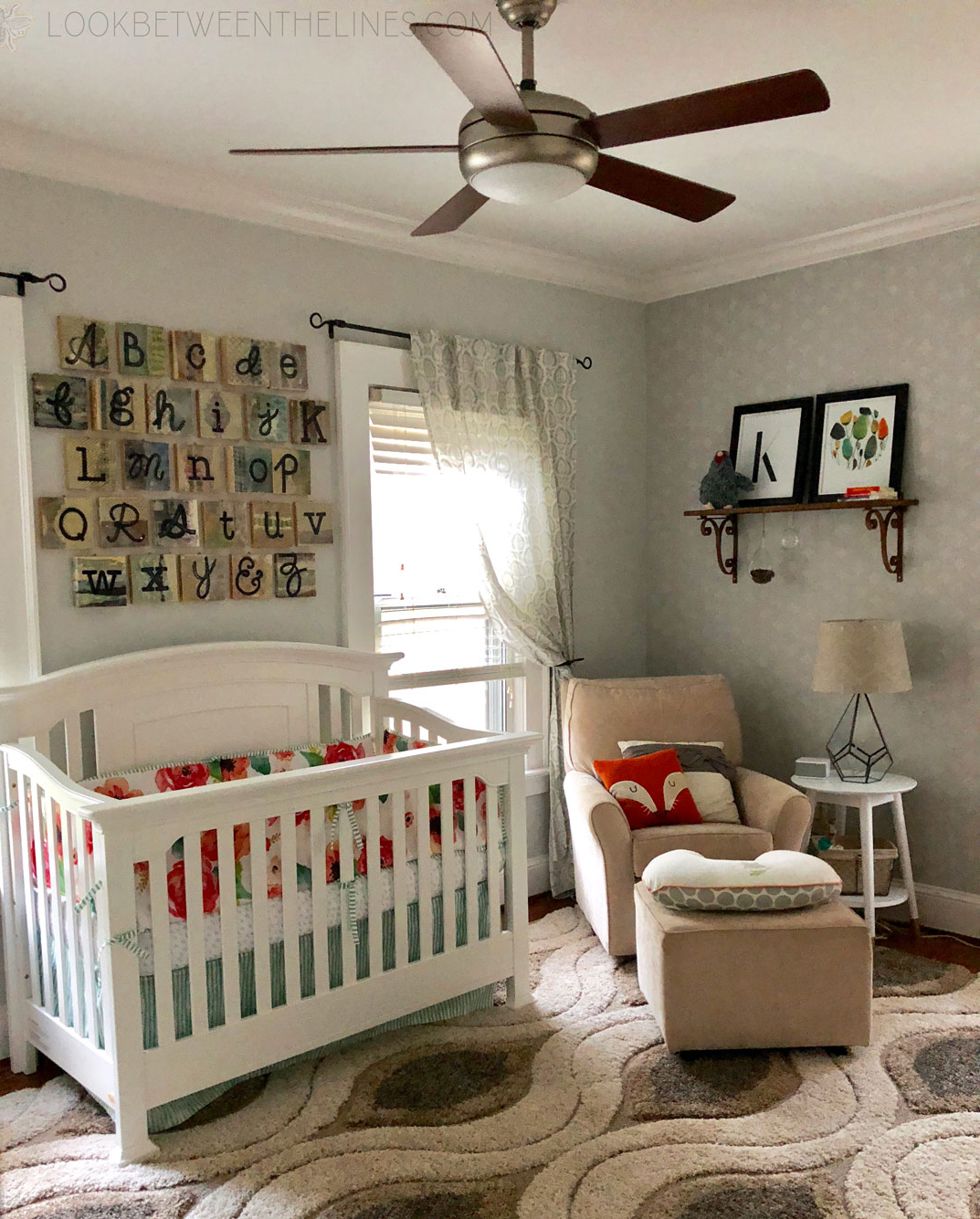 The glider was also recycled from Cooper’s room. There was something very special about continuing the tradition of feeding and rocking my babies in this amazingly comfortable spot. The fox pillow and side table were purchased from Target and the lamp and basket were purchased from World Market. I loved the juxtaposition of the modern, clean lines in the lamp and side table vs. the soft, whimsical pattern on the wall and in the rug. And of course the orange fox pillow went perfectly with the orange chair. 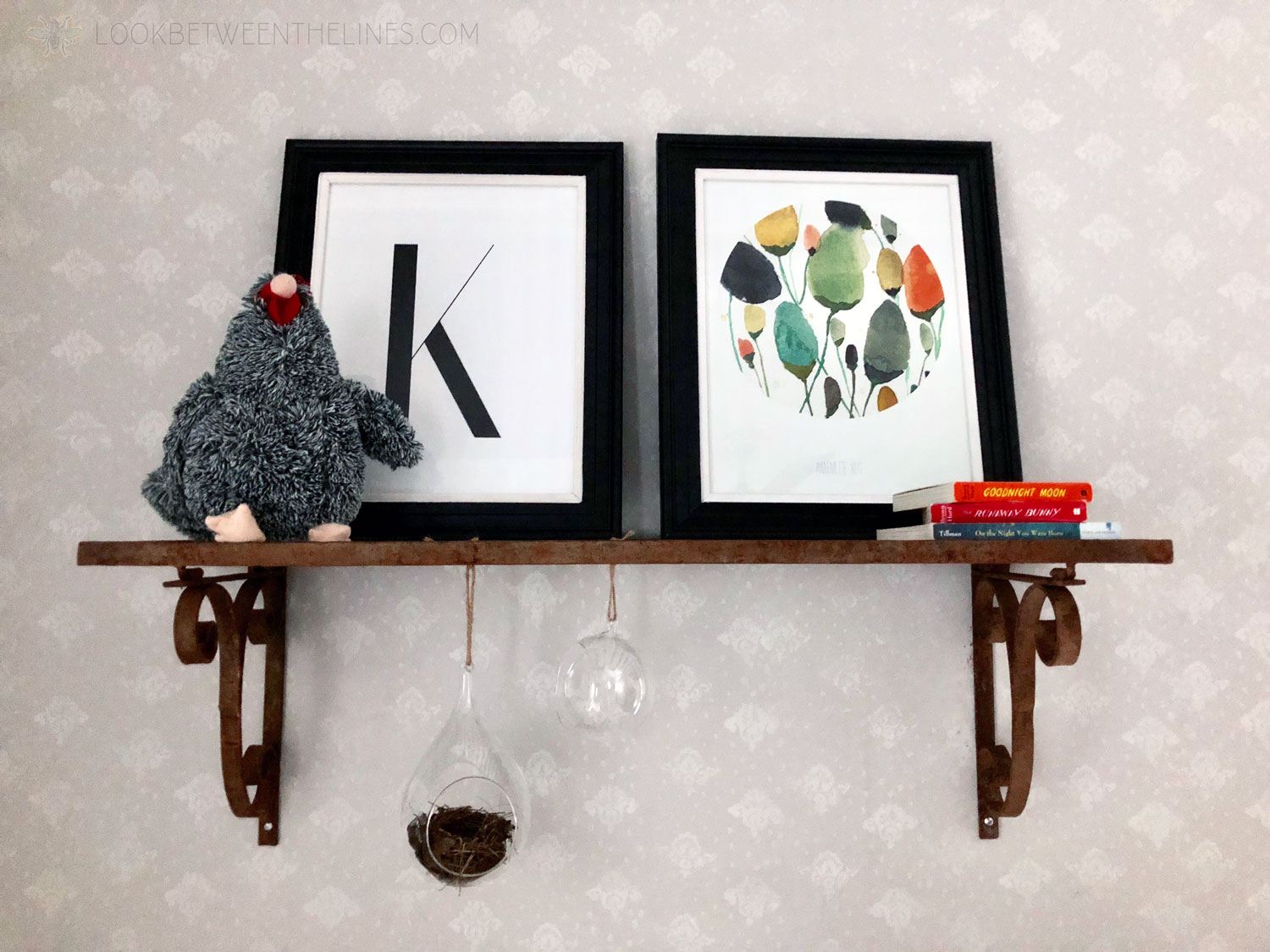 Another important piece in Kennedy’s room is this beautiful metal shelf. I purchased it at an estate sale the first year I lived in Atlanta. I fell in love with the green color of the bars and the antique feel of the rust. After I bought it I never found a place to hang it. This beautiful piece sat in storage for seven years before the light bulb came on and I realized how perfect it was here. It looks amazing hanging on the opposite wall from the old window above the changing table.

The chicken stuffed animal was a gift from a coworker. I knew it had to have a prominent spot because I know Kennedy will love chickens as much as I do. The K print and the floral print came from Etsy. While looking for artwork I wanted something modern and more soft. The colors in the floral print pick up the neutrals, greens, and oranges I wanted in her room and the K is clean, has good contrast, and looks beautiful next to the other print. I selected a few books from Cooper’s vast collection, and intentionally chose colors that would compliment her room.

Before this room became Kennedy’s room it was our guest room. When it came time to convert it I opted not to paint the walls, the colors were already exactly what I wanted. The pattern on the wall was painted on using a patterned paint roller. You can read details about that process here. 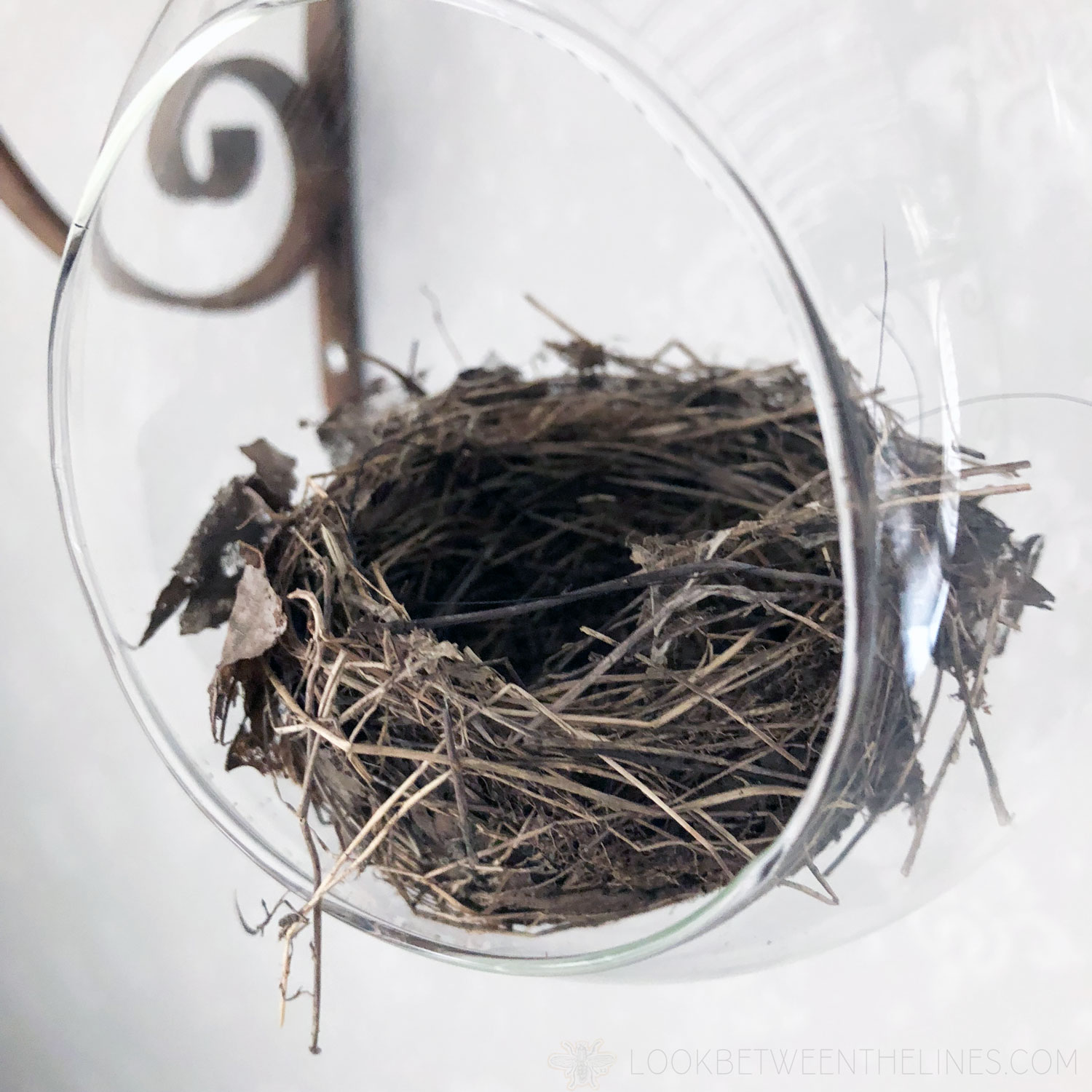 The hanging terrariums also came from World Market. Nick found a birds nest around this time and it was another perfect and personal addition. 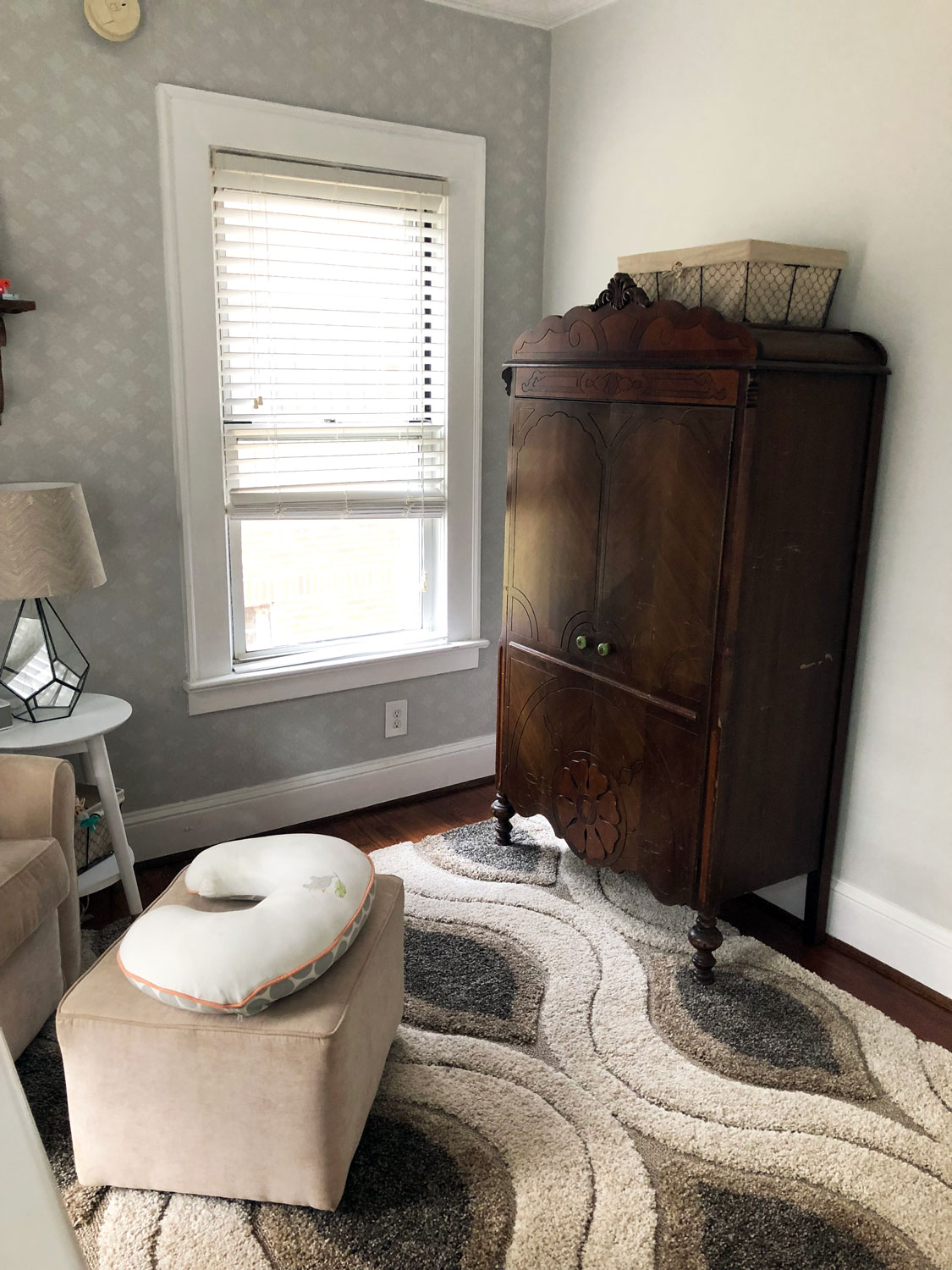 On the opposite wall from the crib is my art armoire. The dark wood doesn’t exactly fit with the decor and the scratched up finish is less than ideal. However, this is a necessary piece of furniture in our house, it holds all of my art supplies (not including the shelf in the top of Kennedy’s closet that is home to all of my artwork). I spent so much time brainstorming spots for this piece, but nothing worked in our small house. I’m hesitant to give it up for something more trendy or in line with the decor in her room because it does have sentimental value. This was purchased by my parents shortly after getting married at a garage sale. It was already loved and old when they purchased it, now twenty to thirty years later it lives with me. It would cost more to refurbish it than it’s worth, but it’s worth a lot to me in memories. It’s on my mental checklist to either take on a DIY refurbish or bite the bullet and pay someone to do it. I’m sure I will post about it here when I finally find time to do it. 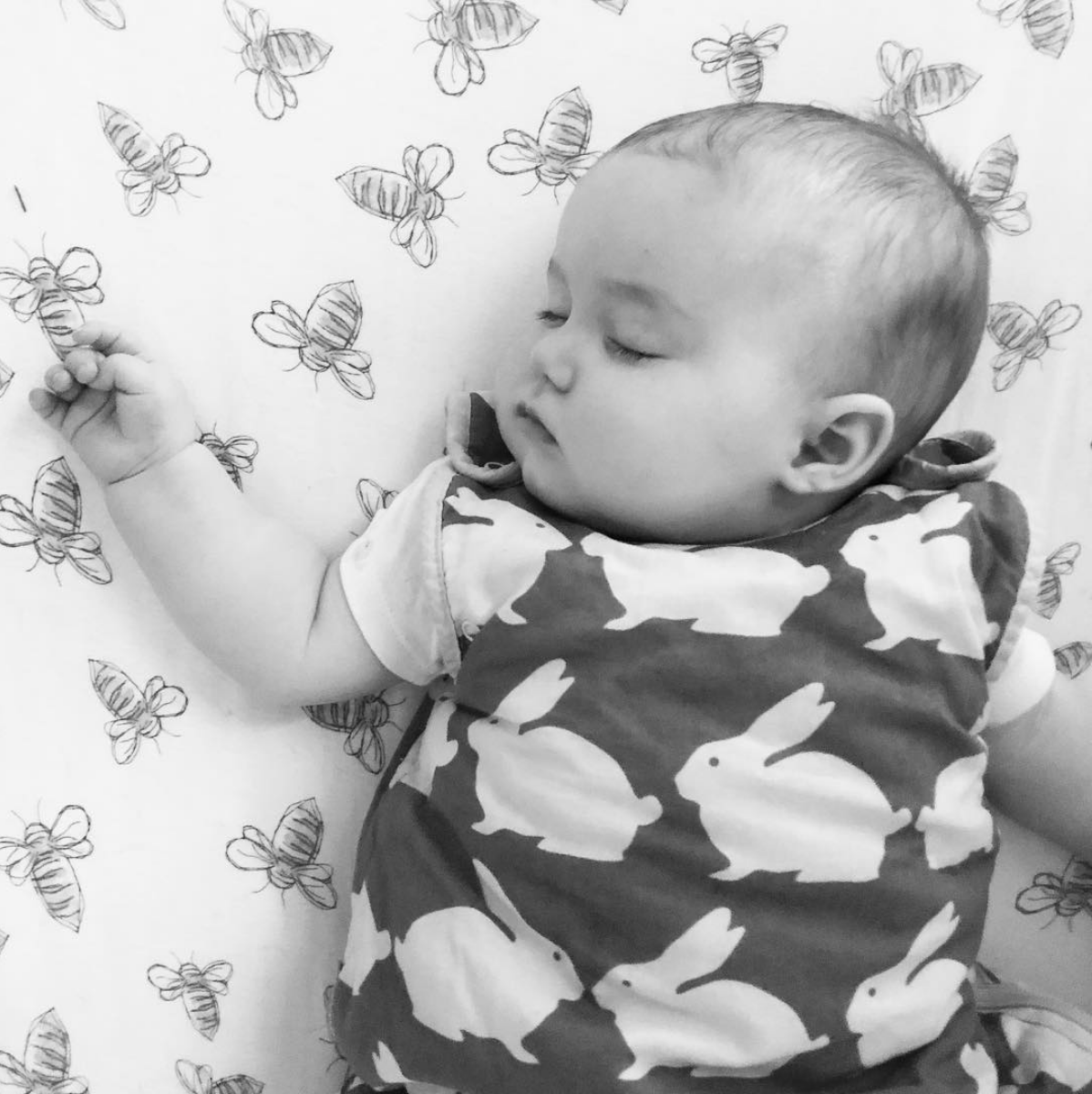 Now almost six months later, sweet Kennedy is sleeping soundly in her crib every night. I love sitting in her bright, warm room rocking her in Cooper’s glider and thinking about all the great things she will do in life. While a nursery isn’t necessary, a baby will sleep just as well in a crib in the corner of your room than in their own room, it is nice to have a space that she can call her own and that I can escape to for some baby snuggles while Cooper is being a tornado in the rest of the house.

Thanks for taking the time to check out my blog! Help me spread the word by sharing with others. Thanks for stopping by! 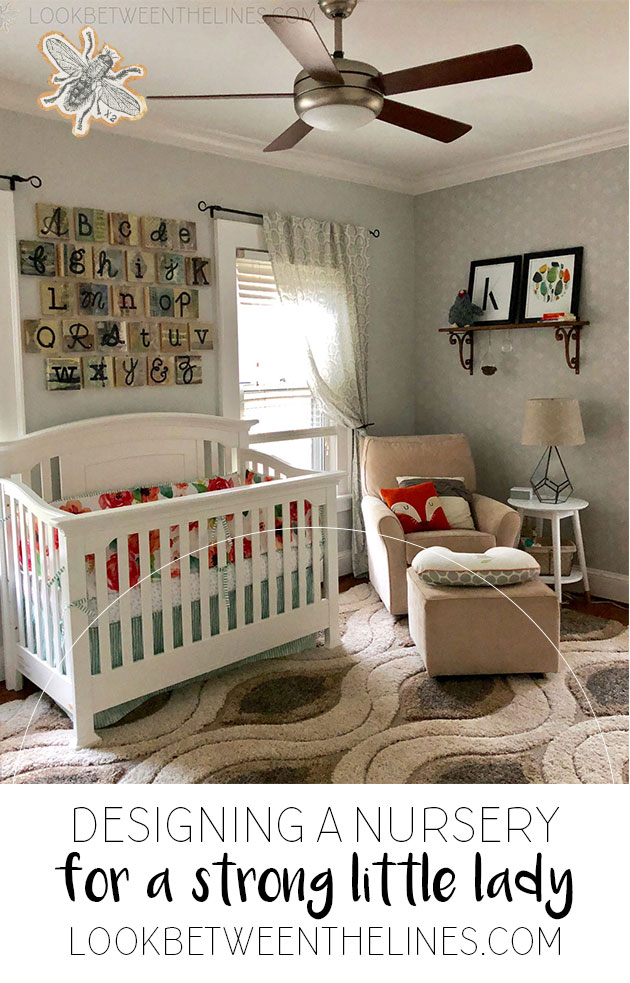